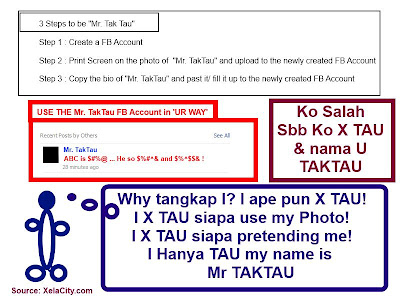 Nowadays, fake social media accounts are everywhere in the Internet. It is so easy for anyone to create a fake account, or to pretend as somebody else. In this example, the victim has been named as ‘Mr. TakTau’.

Step 2 : Print Screen on the photo of ‘Mr. TakTau’. This could be done easily by viewing the real Mr. TakTau’s Facebook account, or simply googling it in the Internet.

Step 3: Copy the Bio info of ‘Mr. TakTau’ and fill it up to the newly created ‘Mr. TakTau’ Fake Facebook account.

“Presumption of fact in publication114A.  (1) A person whose name, photograph or pseudonym appears on any publication depicting himself as the owner, host, administrator, editor or sub-editor, or who in any manner facilitates to publish or re-publish the publication is presumed to have published or re-published the contents of the publication unless the contrary is proved.


According to the Section 114A (1) as stated above, the Real Mr. TakTau is now liable for any legal risk derived from anonymous person, who had used ‘Mr. TakTau’ name and his photo, as well as pretending him. It is now the responsibility for Mr. TakTau to proof that the fake Facebook account is not belongs to him, but somebody else.

The above example is one of so many possibilities in which show that Section 114A will definitely burden innocent people. It is so clear that the amendment of the Evidence Acts had been done so illogically and ridiculous. And until the amendment had been revoked, we are all guilty!