Satay or sate is a dish consisting of chunks or slices of dice-sized chicken or goat or beef or other meats on skewer. And Satay is grilled over a wood or charcoal fire, and then served with various spicy seasonings.

In , satay is a popular dish - especially during celebrations - and can be found throughout the country. And if you were asking around : Where can I find the most famous Satay in ? Definitely the answer will be Kajang Satay. I have no idea why Kajang Satay has becoming so popular lol.. Personally I just feel it look Huge only.. And is far expensive than Satay in other places. The taste? Perhaps some really like Kajang Satay, but me prefer something little bit more "crispy" than Kajang Satay. In order to have such crispiness, sure the meat can not be cut as big as Kajang Satay == 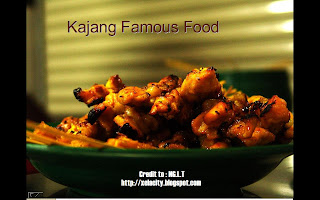